What is Color Blindness and how is it treated?

The perception of color occurs when the optic nerves receive light waves reflected from objects and transmit them to the brain. Consideration is given to the wavelengths of reflected light when naming colors. If an object directly reflects or scatters all the light that strikes it, the human eye perceives it as white, whereas the brain perceives black objects that directly absorb all the light waves that strike them. Due to the loss of function of certain nerve cells in the eye, the different wavelengths of light reflected by objects are unable to be transmitted to the brain correctly, preventing color vision. These disorders of color perception are known as color blindness.

In healthy individuals, the eye is composed of three layers. These layers are known as the sclera, uvea, and retina, respectively. The sclera is the outermost layer of the eye and is responsible for the white color of the eye. The uvea is located in the middle of the organ and nourishes it via the blood vessels it contains. The cells responsible for vision are located in the innermost layer of the retina. There are photoreceptor cells in the retina, which are responsible for transmitting light from the eyes to the nervous system. Due to their structure, these photoreceptor cells, of which there are two types: cones and rods, are sensitive to light entering the eyes. There are three types of cone cells that are specialized for red, green, and blue. In the case of deficiency or damage to the cone cells responsible for color vision in the retina, the patient may be unable to perceive certain colors or differentiate colors in images with mixed hues, depending on the underlying condition or disorder. This disorder is known as color blindness. There are three different classifications of color blindness based on the cone cells affected.

How does color perception occur in the eye?

Through the cornea and lens of the eye, light is transmitted to the retinal layer. The cone and rod cells that receive the light convert it into signals for transmission to the nervous system. Vision is realized when these signals reach the brain via the nerves of the eye. According to research, rod cells are responsible for night vision by distinguishing object shapes and only black and white colors. Also, research indicates that cone cells contribute to image clarity and color perception.

What is color deficiency?

Who is Affected by Color Blindness?

Cone cells must contain all three different types of photoreceptors in order for color vision to occur correctly. Defects in the function of one or more of these three types of cone cells result in a disorder of color perception and the medical condition known as color blindness.

What brings about color blindness?

The recessive genes that cause color blindness are passed down from generation to generation. Since it is transmitted by the X chromosome, this disease, which is one of the most prevalent inherited conditions, affects men approximately twenty times more than women. However, it is incorrect to assert that color vision disorders are caused solely by genetic factors. Although extremely uncommon, various visual defects, such as color blindness, can be caused by injuries that cause trauma and damage to the retina, certain diseases affecting the structure of the eye, intense contact with toxic substances, and certain systemic diseases.

Colorblindness Manifestations
It is a common misconception that color-blind individuals cannot perceive any color and perceive the world in shades of gray. This blood is however present in the vast majority of patients.
Not true for me. The inherited form of color blindness is prevalent. Green, yellow, orange, and red are perceived as having the same tonality in this instance. Their distinguishability is solely determined by their density. Since this condition is present at birth, individuals with color blindness may develop the ability to differentiate between certain tones over time. In a rare and severe form of color blindness, the disorder is progressive and the individual perceives the world in black and white.

Although it does not pose a significant problem in daily life, the individual cannot work in certain occupations. Because red and green are commonly used on road and sea signs, colorblind people are unable to work in the driving and maritime industries, for example. Because inability to recognize colors can lead to life-threatening situations.
Typically, color blindness is a disease with few symptoms. In general, the symptoms of color blindness can differ from those of partial or complete color blindness.
In partial color blindness, blue, red, and green cannot be perceived or differentiated at different levels, whereas in complete color blindness, colors are perceived as black, white, and shades of gray. Consequently, the symptoms may vary based on the individual’s visual impairment.

There is no treatment for inherited colorblindness. Colorblindness caused by weakened visual nerves or accompanied by visual impairment can be partially corrected, or at least its progression can be halted.
Many people have been unaware of congenital color blindness for years, as it is harmless. It is detectable during a standard eye exam. Regular eye examinations are crucial because a decline in the ability to distinguish between colors may also be caused by an eye disorder.

the original by Dr. Arranged by Shinobu Ishihara as a color card print and set to inspect in the room with sufficient daylight. Electronic adaptation of monitor light and color settings here may cause illusions due to light reflections. Although it is not a formal test, it can be considered as a useful method for those who are curious about color vision, where they can test themselves. If you have any problems with the test, contact our center and take further tests.

The color intensity of the computer’s video card should be set higher than 256, the brightness and contrast of a 15-inch monitor with a resolution of 1024×768 should be adjusted to an average setting, and the test should be carried out from a distance of 35-40 cm, by wearing eyeglasses if necessary.

Utilizing customized filters to alter the wavelength of each color that enters your eyes is how it operates. These filters are designed specifically for the colorblind. Although glasses are easier to wear because they are worn on the outside, the lens is not visible when worn in direct contact with the eye.
It does not restore a person’s color perception to the level of a healthy person, but it does allow them to pass tests by ensuring that the colors they cannot distinguish are perceived differently from one another. It is important to note, however, that there is a high risk of detection for those who intend to wear these lenses in exams for occupations that require color perception, because these lenses are produced in colors that differ from the norm and people undergo thorough eye examinations during exams. How to do makeup on colored eyes?

How to do makeup on colored eyes? “If you have colored eyes, you must be very careful when applying makeup. Here are some make-up alternatives for 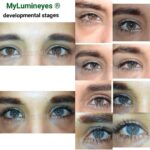