What are amber eyes and honey-brown eyes?

Brown eyes vary in color from dark, coffee-colored brown to bright amber or honey brown. The color brown is associated with the earth and the natural world, and research shows that people with brown eyes are seen as more trustworthy. People of Asian, Spanish, South American, and South African origin often have amber eyes. Amber eyes resemble a gorgeous honey color. People with hazel eyes often have their eye color characterized as light brown, golden, brownish-green, or as the color of hazelnuts, similar to its namesake. The intricacy of characterizing the eye color stems from the fact that its hue varies based on the surrounding light. Amber eye color are reportedly one of the rarest eye color, with just roughly 5 percent of the global population possessing them. Amber eyes contain mostly the pigment lipochrome and less melanin.

This eye color may vary in color from a light golden brown to a rich honey brown colored eyes.

Amber eyes are quite uncommon-rare

According to the majority of reports, only approximately 5% of individuals have real amber colored eyes. If your eyes are golden or yellow in color, then you have amber eyes. There are several colors of amber, which some individuals describe as copper, gold, or an extremely light brown. Blue or gray eyes result from the absence of pigment (melanin) in the iris’s front layer. Amber eye color is really beautiful. They are also quite uncommon. Although the actual number of individuals with them is unclear, scientific investigations indicate that only 0.1% of the human population possesses them. Some individuals refer to this eye color as “golden.” Others use phrases such as “copper” and “yellow.”

In reality, most of our perception of eye color is subjective. As with other eye colors, a person with amber eyes acquires their hue via inheritance and genetics. In particular, pigmentation of the iris and light dispersion around the iris itself are the two elements that determine eye color.

In particular, people with amber eyes are thought to have had that color since the first hominins appeared on the geologic time scale. Amber eyes are yellowish, golden, or copper in color and lack brown, green, or orange specks. If your eyes are amber, you are likely of Spanish, Asian, South American, or South African origin. Amber eyes are among the rarest eye hues seen in humans, which explains why individuals with them tend to rank among the world’s most beautiful eyes.

If your father had amber eyes and your mother had hazel eyes, it is likely that you have a golden eye color

If you had two amber eyes as biological parents, you would have a copper-colored trait. Some ocular experts believed that recessive genes also contributed to eye color. It is challenging to characterize amber eyes. This is because amber tints may be light or dark and include yellow-copper, green-hazel, and brown tones. A person has amber eyes when the reflecting light from their iris reflects a golden color that is almost transparent. In addition, many individuals with Wilson disease exhibit Kayser-Fleischer rings, which are greenish, goldish, or brownish rings at the corneal periphery. Copper accumulation in the eyes produces Kayser-Fleischer rings.

What Is the Difference Between Amber and Hazel Eyes?

Hazel eyes are not the same as amber eyes. Hazel eyes may have flecks of amber or gold, but they usually have a lot of different colors, like green, brown, and orange. Additionally, hazel eyes may seem to change color and have flecks and waves, while amber eyes have a consistent gold tone.

There are two basic causes of red or pinkish eyes: albinism and blood leakage into the iris. Due to a lack of pigment, albino people often have very pale blue eyes. However, some varieties of albinism may cause the eyes to look red or pink. Similar to the gemstone for which they are named, amber eyes exist in varied hues. Consider amber eyes to be a color of light brown with a golden or copper undertone.

Typically, hazel eyes are a mixture of green, brown, and gold

If your eyes are golden or yellow in color, then you have amber eye color. Amber eyes are reportedly one of the rarest eye hues, with just roughly 5 percent of the global population possessing them. Amber eye color contain mostly the pigment lipochrome and less melanin. This eye color may vary in color from a light golden brown to a rich honey brown eyes. Hazel eyes must be one of the most coveted eye hues available. They get their name from the color of hazelnuts, and their beautiful many colors almost make it look like they change colors throughout the day. The iris of a person with hazel eyes is usually a mix of brown, green, and gold. This is what makes them stand out.

Also noteworthy is the range of color combinations possible in hazel eyes. Some will have a strong green color, while others will have a more dominant brown color. This is why some hazel eyes are mistaken for green eyes and others are almost identical to brown eyes in person or on camera. The fact that just 5% of individuals have hazel eyes makes them not only unusual but also highly uncommon. Even though you’re more likely to encounter someone with brown or even blue eyes, there’s still a high possibility of finding someone with hazel eyes.

While both amber and brown eyes contain the same pigments, amber eyes have more pheomelanin (lighter red or yellow hues) than brown eyes do eumelanin (darker red or brown hues) (dark brown-black). Amber eyes are more translucent than brown eyes. Amber may have a brown tint, but amber eyes are yellow or reddish-orange in color.Some individuals wrongly assume that hazel and amber eyes are the same color, although there are clear distinctions between the two. Hazel eyes are often a combination of green and brown, while amber eyes lack any trace of green. In addition, amber eyes tend to have a more solid color, while hazel eyes seem to include specks of various colors.

Both hazel and green eyes receive their color through Rayleigh scattering, but the way light is dispersed in the iris in conjunction with melanin levels separates the two. Hazel eyes contain an abundance of melanin in the center or, in some circumstances, the outer portion of their irises, which gives them their characteristic green-brown hue. In contrast, green eyes contain far less melanin than hazel eyes, giving them a solid green tint. The most prevalent eye color around the eye is brown. This can range from dark brown to light brown to honey brown eyes.

People with blue eyes have less melanin than those with any other eye color. Blue eyes are thought to be caused by a change in a single person’s genes. This is the most sought-after and scarce eye color hue.The color of hazel eyes fluctuates based on clothing and lighting conditions. In hazel eyes, the hues brown, green, amber, and blue are seen.

Can i change my eyes to hazel or amber-honey colors?

Modern techniques such as “Lumineyes” can change eye color. My Lumineyes can guarantee your safety and effective outcomes. Clearly, natural outcomes are superior benefit of laser eye color change by Lumineyes. Laser epilation is a good example of how the method for laser changing your eye color works. My lumineyes serve as a laser epilation for my eyes,it does not harm other tissues. The outcome of a procedure depends on ophthalmologist knowledge and laser precision. Lumineyes Xtra laser eye color change surgery” is the newest and most innovative use of the Lumineyes method. In summary, a laser with unique capabilities activates brown or dark pigmented cells in the iris, resulting in a light blue,amber,honey,hazel or green color.

Is putting honey in your eyes safe?

Honey is renowned for its many curative and medicinal characteristics! Honey’s applications and advantages for the skin, the stomach, and general health are well-known, but did you know you can also use it for your eyes? Yes, you are correct! Honey not only imparts a delicate sweetness to your meal and provides you with several essential nutrients, but it also improves your eyesight! Additionally, it helps prevent inflammation and eye infections! Learn how to utilize honey for your eyes so that the next time you have eye redness, itching, or irritation, you can just dab a touch of honey on your eyes for rapid relief!

Honey used topically helps alleviate eye inflammation and discomfort. Additionally, it may eliminate microorganisms that might be causing an eye infection. Some individuals use honey to attempt to gradually alter the color of their eyes; however, there is no scientific evidence to support this claim.

Honey diminishes the color my eyes? really? There is no actual proof that honey can alter the color of an eye’s eyes; however, there is an urban legend that honey can be used to do this. Applying honey to change eye color is a mistake. The eye color is determined by the iris, a structure located in the center of the eyeball, and not by any material deposited on the outer layer of the eye. The introduction of foreign substances may expose the eye to potentially dangerous irritants and toxins. A safer method of eye color change is “Lumineyes eye color changing” procedure. 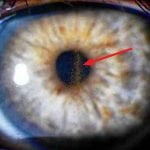 Laser Eye Color Change Methods-Which Surgery or laser is better? We will look for an answer to the question of where is the laser eye