Everyone has lived, and every now and again, intriguing items fly into your eyes. What is their origin? You may not be familiar with its scientific term, but you have undoubtedly seen the famous floating forms. In medical language, these floating pictures are known as myodysopsia. They might be a dot, a thread, a floating tail, or a spider web. These are not optical illusions; they exist in your sight.What happened to the floating bodies? The retinal layer, which is made up of light-sensitive cells, is located in the rear of the eye. The retina’s nerve cells, also known as neurons, are engaged when they receive light and relay information to the brain about what they see through the optic nerve. A material known as vitreous gel exists between the lens and the retina.

The gel structure here may weaken and become more liquid as time passes. The particles that have entered the vitreous may then cluster together, casting a shadow on the retina. Floaters may be caused by a retinal tear or detachment. New flyings are risky. He should consult an ophthalmologist as soon as possible. Sudden floaters may also be caused by posterior vitreous detachment. A retinal tear examination should be performed. Eye inflammations, known as uveitis, may sometimes create eye floaters. A posterior eye examination allows the ophthalmologist to differentiate between retinal detachment, inflammation of the eye, and posterior vitreous detachment.

You are fortunate if the examination reveals that you do not have any of the illnesses listed above. It indicates that you do not have an emergency illness. In international literature, vitreous gel deterioration is referred as as vitreous floaters (English) or Mouches volantes (French). Objects generated as a result of posterior vitreous detachment eventually diminish. It may sometimes be entirely hidden.

Let’s look at some eye anatomy to figure out what’s causing this issue. The cornea is in front of the eye, followed by the blackish pupil and the colorful iris layer that surrounds it. The ocular fluid is located between these two layers.

The retinal layer, which is made up of light-sensitive cells, is located in the rear of the eye. The retina’s nerve cells, also known as neurons, are engaged when they receive light and relay information to the brain about what they see through the optic nerve. A material known as vitreous gel exists between the lens and the retina. Vitreous is a clear gel-like material that is largely made up of water. Vitreous gel, unlike ocular fluid, does not renew. You live your whole life with the vitreous you were born with. That is, once an external material, such as blood or a cell, enters the vitreous gel, it remains there. As light travels through the eye, these particles cast a shadow on the retina. This is what we perceive as floating things.

The gel structure here may weaken and become more liquid as time passes. The particles that have entered the vitreous may then cluster together, casting a shadow on the retina.

Floaters are a pretty prevalent condition. According to a research done in England, roughly 14 people each month present with this problem. Another research, done with 603 participants using a smartphone app, found that 76% of them noticed flying objects, with one-third reporting that it was an issue impacting their eyesight.

Ophthalmologists often consider it safe since patients learn to deal with it or because these bodies vanish after a time.

In others, the disorder is more significant, producing visual abnormalities or being a precursor to future issues. The abrupt emergence of floaters in the older eye may indicate vitreous gel separation from the retina. In this situation, a tear in the retina might lead to blindness.

Although most individuals do not have floaters, web searches for therapy will provide a number of options, ranging from yoga to surgery to the yttrium aluminum garnet (YAG) laser. Although this laser technology has been popular in the area of ophthalmology, there hasn’t been much study on how successful it is in treating this condition, and it hasn’t yet been approved by the authorities in the United States.

When floaters considerably impair vision, a therapy known as vitrectomy is used, in which a saline solution is injected instead of the vitreous gel in the eye. However, vitrectomy is only used as a last option because to the substantial dangers of retinal rupture and cataracts.

According to an Italian study published in 2012, most individuals can handle the sight of flying objects using traditional means, which may be adequate to educate and soothe worries about the origin of this issue.

Seeing Floaters in the Eye

What is the source of the shapes flying in the field of vision?

You may not have heard of its scientific name, but you have certainly seen the popular floating shapes. These floating images are called myodysopsia in medical terms. They can be in the form of a dot, a string, a floating tail or a spider web. These are not optical illusions, they are really there in your eye.

Where are the floating bodies?

At the back of the eye is the retinal layer, which consists of light-sensitive cells. The nerve cells that make up the retina, also called neurons, are activated when they perceive light and send information to the brain about what you see through the optic nerve. Between the lens and the retina is a substance called vitreous gel.

As the age progresses, the gel structure here may deteriorate and become more liquid. Then the particles that have entered the vitreous may clump together and cause a shadow to fall on the retina.

Floaters may indicate a retinal tear or retinal detachment. New flyings are dangerous. He should see an ophthalmologist immediately. Posterior vitreous detachment can also cause sudden floaters. Retinal tear investigation should be done. Sometimes, eye inflammations, which we call uveitis, can also cause eye floaters. The ophthalmologist distinguishes between retinal detachment, inflammation of the eye or posterior vitreous detachment with a posterior eye examination.

If you do not have any of the above diseases as a result of the examination, you are lucky. It means you don’t have an emergency disease. Vitreous gel degradation is called vitreous floaters (English) or Mouches volantes (French) in foreign literature. Objects formed due to posterior vitreous detachment gradually decrease. Sometimes it goes completely out of sight.

What to Do If Flying Objects Do Not Disappear?

If there is no damage or tear in the retina, it is expected for a while, and the complaints usually disappear or decrease over time. However, if the floaters increase or cause vision loss, treatment may be required.

For most people, floaters are not a major problem, but online searches for treatment will reveal a variety of methods. Unfortunately, most of these methods are useless. Two main treatment methods are used for floating bodies. These are removal of some vitreous bands with YAG laser and removal of vitreous gel by vitrectomy surgery. Although the YAG laser technique has become partially widespread in the field of ophthalmology, there is little research on how effective it is in the treatment of this problem.

In cases where floaters significantly affect vision, a treatment called vitrectomy is applied and the vitreous gel in the eye is surgically removed from the eye. Vitrectomy is only applied as a last resort, as it involves serious risks such as retinal detachment and cataracts.

It is now possible to correct stressful situations such as spider webs, commas, blackheads and flying flies floating in the eye with a new generation laser treatment. We can eliminate these problems to a large extent by using a newly developed method (vitreolazer) and laser for this problem, which we call vitreous degeneration. If you are complaining about this situation, you can apply to our clinic. 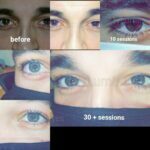